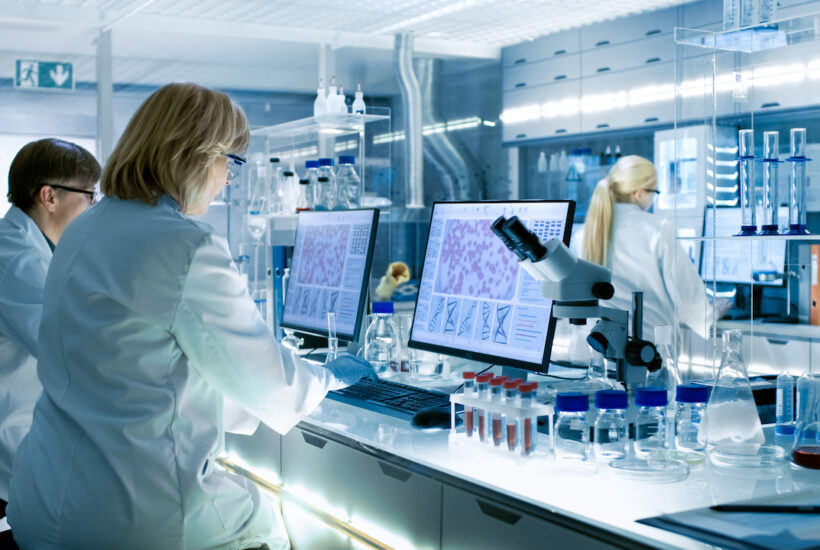 When we hear about stem cell research, the popular vision that comes to mind is scientists buzzing around in a lab growing redirected stem cells in a petri dish. What we hear less of, however, are the researchers developing pharmaceuticals that target the biochemical cues affecting the stem cells the patient already has in their body. That’s the approach Satellos Bioscience Inc. (TSXV: MSCL) is taking, and the impacts, particularly on muscular dystrophies, could be huge.

An early target of the company’s research is a rare genetic disease called Duchenne Muscular Dystrophy (DMD) which usually leads to pulmonary and respiratory failure.

DMD is a genetic disease almost exclusively affecting young boys and, with current treatments, patients diagnosed with the disease can usually only expect to live into their 20s or 30s. However, early preclinical work by Satellos Biosciences suggests the company may be on the verge of developing a treatment that can dramatically improve this prognosis, if not reverse it entirely.

The company’s work is based on the research of Dr. Michael Rudnicki, Senior Scientist and Director of the Regenerative Medicine Program and the Sprott Centre for Stem Cell Research at the Ottawa Hospital Research Institute. His discovery — that Duchenne Muscular Dystrophy results in perturbation of stem cell polarity and reduced stem cell function — has set the stage for innovative therapeutic approaches, such as Satellos is pioneering.

Thus, Satellos’ main program is focused on developing a drug that would correct muscle stem cell polarity via biochemical signalling. This would then restore the body’s innate muscle repair and regeneration process.

Frank Gleeson, Satellos Bioscience’s CEO, said, “In our bodies, we have biochemical pathways of different kinds… and these are essentially like communication towers or satellites that enable mobile phone users to talk to one another. Similarly, signals are relayed through proteins interacting with each other, sometimes through biochemical stimulation, sometimes through physical interaction, and sometimes through a combination of the two. We’ve identified communication pathways that signal to muscle stem cells to act in certain ways, and we’ve identified errors in these signals that inhibit proper muscle stem cell function.”

Gleeson continued, “We’re intervening in those biochemical pathways to correct the signaling and restore stem cell polarity and regenerative function. It is space-age stuff and at the same time, it’s grounded in elegant science and a deep understanding of the mechanisms in play.”

So far, researchers have done preclinical work on proof of concept by studying mice genetically engineered to have muscular dystrophy. And, while they continue on that path, Satellos now aims to proceed with human safety trials by the end of 2023. Following this safety phase, Gleeson says it’s possible the company could approach the U.S. Food and Drug Administration (FDA) for accelerated approval in 2025.

“While this is early science, we don’t believe we’re that far away from being able to offer something helpful to patients,” he says. “To the patients, of course, it seems another lifetime of waiting and we’re very sensitive to that. But, from where we are in the context of typical drug development of 10 years and a billion dollars, we’re not that far away. And we’re working every day to find safe ways to go there sooner.”

“We strongly believe that we offer to the community of DMD patients and their families the chance for a disease-modifying treatment, something that could meaningfully alter an individual’s life.”

From Multiple Dystrophies to Sports Injuries, DMD Is Just the Beginning

“Frank and I had a meeting of minds very early about the aim to develop small molecules that mobilize stem cells to stimulate regeneration in tissue as a way forward to treat diseases, as a way forward for regenerative medicine,” Dr. Rudnicki says. “We’ve incubated that idea through many, many conversations over the years.”

Thus, DMD isn’t the only target for Satellos’ leading-edge science. Considering the possibilities for its treatments to address muscle regeneration opens up a spectrum of conditions that could be addressed.

“Not only do we see this as relevant to multiple wasting disorders,” he says, “we think that other stem cells in other parts of the body can be targeted — in the retina, in the brain, in the gut, the blood systems.”

Gleeson notes that there are about 30 different types of dystrophies alone, in addition to sports injuries, surgical recovery, and aging concerns.

“The palette is very, very broad,” he says.

A smart investment while doing good

Because the potential for applying of Satellos Bioscience’s research is so broad, so is the potential good Satellos’ research can do not only for patients, but also for investors.

As well, in addition to executing a reverse takeover with iCo Therapeutics Inc. as one step in a strategy to raise capital and build value for shareholders, Satellos was able to successfully raise concurrent financing of $7.25 million, which allowed the company to ramp up its team and amplify its drug discovery and development efforts.

SEE ALSO  Spanish government approves $57.1 million for the supply of radiopharmaceuticals in the SAS

David Bautz, a Zacks Small Cap Research Senior Biotechnology Analyst with a PhD in biochemistry, says Satellos is “way undervalued” compared to other companies doing DMD research. The gene therapy approach [of some other companies] is not working, so Satellos is trying something that’s completely different. The theory behind it is very exciting, in my opinion. They’re seeing exciting things in preclinical models, which is a good start.”

“From that perspective, while still risky, I think a lot of that risk is taken away by the fact Satellos’ valuation currently is so low,” Bautz continues. “And clearly the market values companies that are doing DMD treatment.”

Indeed, CEO Gleeson says the company’s strong leadership team has established relationships with advocacy groups such as Parent Project Muscular Dystrophy, which made a US$1 million investment in its research.

According to Rudnicki, “these patients really have a significant demand for help. If they can use their hands or limbs to be more self-sufficient, even for a couple more years, that’s a huge improvement in quality of life… And we are very hopeful we can do more.”

“This is about changing the lives of these children who are unable to walk and are going to die at a young age.”

And the potential for Satellos and its MyoReGenX platform doesn’t stop with DMD, either. There are dozens of other degenerative conditions in muscle tissues — as well as other parts of the body — that could prove good targets for Satellos’ technology, among them complications associated with aging.

For more information on Satellos Bioscience, visit its website.

Make sure to follow Satellos on social media for the latest updates: