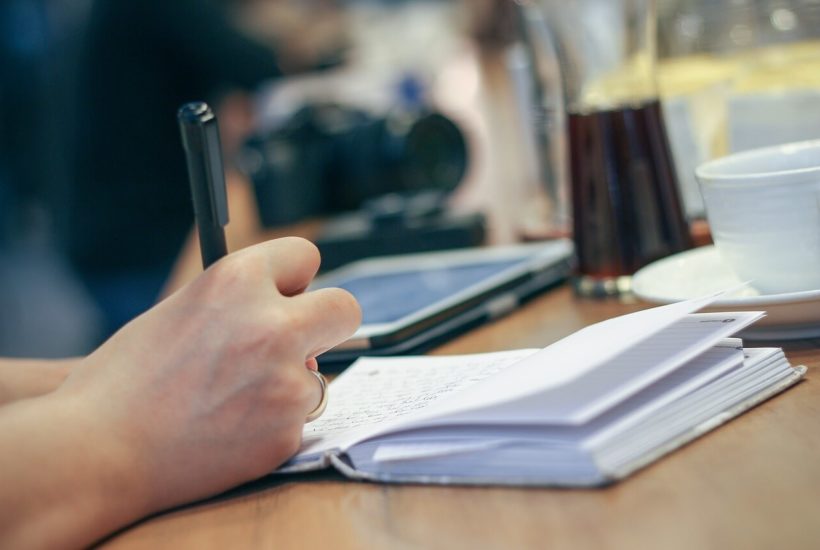 So much energy, in fact, that “turning off,” or forgetting about work for a period of time can feel counterproductive when you’re set on creating something engaging and effective – especially if they’re under a deadline. That’s when it’s hardest to get past the guilt of tuning out and turning off.

Why? Because it seems like you’re wasting time. But are you really?

Are you doing yourself a disservice every time you step away — whether it’s for a short break or long retreat? Or are you investing in your work, and ensuring that it will be as fresh, creative, and persuasive as your potential allows?

The benefits of turning off

Basically, “turning off” means taking a break from work — and not thinking about it while you’re away. Of course, all breaks are not created equal.

How long you turn off for, where you go, and who you’re with during your time away are just a few variables that make every break unique. But regardless of the circumstances, studies continue to prove that you’ll return a better, stronger, and more aware version of yourself.

Specifically, a couple of beneficial things will happen:

According to a study conducted at The University of Illinois, brief diversions from a task can trigger a dramatic improvement in one’s ability to remain focused on that task for a prolonged period of time.

In the study, 84 participants were divided into four groups and asked to focus on a repetitive computerized task. The control group worked on the task for 50 minutes with no breaks. The “switch” and “no switch” groups had to memorize four digits before taking on the task and had to respond if they saw one of those digits. However, the “switch” group was presented with the digits twice. Finally, the “digit ignored” group was also shown four digits, but were asked to ignore them.

The group that saw no drop in performance? The switch group, as they were given two brief breaks to respond to the digits which allowed them to stay focused.

So if you’re feeling guilty about taking a break, keep in mind that intermittently leaving your work will refocus you, and can actually give you clarity. When it comes to writing, clarity is the mother of desire and action.

You’ll be better prepared to come up with creative solutions.

While it’s easy to assume that daydreaming or taking a break is a waste of time, a study conducted at The University of British Columbia revealed that our brains are actually highly active when we daydream — more so than we previously thought.

When we relax and take a break from challenging thinking, we allow our thoughts and ideas to incubate in our minds. And this ultimately sets us up to generate new, creative solutions.

When you keep pushing through work without taking a break … it shows. Your energy levels slip. Your smile fades. And your overall demeanor takes a turn for the worst. Not to mention, it can lead to larger issues such as exhaustion or chronic stress.

While the fear of being seen as replaceable or not having the time to take time off will often keep you from taking the plunge, you won’t be doing anyone any favors when you’re burnt out.

According to an infographic from CityPass, almost nine out of ten American workers feel like time off increases their happiness, and 91% of business leaders admit that employees who take time off typically return feeling recharged and ready to work more effectively.

SEE ALSO  Cool stamp facts you wish you knew before

Moral of the story? Book that trip. Your work will be there when you get back.

How to take more breaks and forget about work

Experiencing these benefits, of course, means you must turn off. And that’s not something we’re all good at.

To make it easier, check out these seven tips designed to help you take a break from the grind and recollect your thoughts. You’ll notice there are a variety of suggestions — from quick time management breaks to full-fledged sabbaticals — so you’re sure to find something that makes sense for you.

Known for being the go-to strategy to avoid straining your eyes and developing a repetitive stress injury (RSI), the 20-20-20 Rule also doubles as a nice, frequent break for people who sit in front of a computer all day.

Here’s what you do: Set a timer to go off every 20 minutes you’re at your desk. As soon as you get the alert, look away from your monitor and stare at something 20 feet away for at least 20 seconds.

This is a good opportunity to zone out and enter your “diffused” mode — where who knows what’ll happen next.

2. Use the Pomodoro technique.

In the late 80s, a man named Francesco Cirillo invented an easy productivity method that people still use and love. (And he named it after that kitschy timer your mom used to let you twist.) 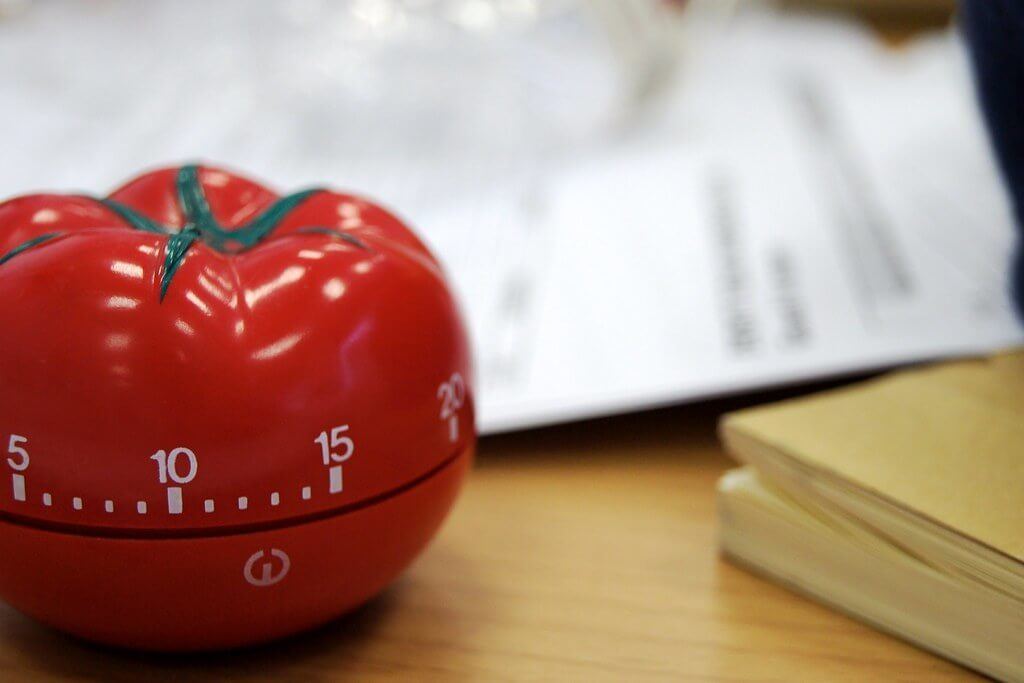 The Pomodoro technique is a quick productivity method that’s easy to use. (Photo by Luca Mascaro via Flickr. CC BY-SA 2.0.)

Here’s what you do: Set a 25-minute timer and start working. When it goes off, stop working for five minutes. Use your five minutes any way you like, and then promptly get back to work as soon as they’re up. Do that four times in a row, and then take a 30-minute break before starting your fifth session.

By locking you into a timeframe, the Pomodoro Technique incites urgency, which may inspire you to make quicker decisions and waste less time.

3. Capitalize on your Ultradian Rhythm.

We sleep in cycles, alternating between two forms of sleep: REM (deep, dreamy, restful sleep) and non-REM (less deep, more superficial sleep). And while one may be more intense than the other, both forms must alternate in intervals of 90 minutes to achieve a truly restful night of sleep. It’s called the Ultradian Rhythm, and it just so happens that it’s present in our waking lives, too.

Here’s what you do: Set a timer for 90 minutes and begin working. Silence your phone. Block Facebook. Don’t even stop to edit your work. Just work. When your timer goes off, stop working and take a break for 15 minutes. While taking a break seems unproductive, the act will actually help you balance your energy and avoid burnout. When you’re done, try it again by focusing on a different project for 90 minutes.

4. Actually, allow yourself the weekend.

Hopefully, employing some of the more micro time-management methods above will help you clear your workload throughout the week, leaving you completely free over the weekend — which is what you want, right?

Here’s what you do: If years of workaholism have made “turning off” a difficult and unnatural task for you, divide your weekend into activity chunks (the way you would a work day). Doing so may help you become more comfortable with the idea of doing nothing.

Leaving your work computer switched “off” for two days in a row may feel weird at first — like a strange emptiness — but it’s a healthy mental exercise and it’ll help you write your best copy.

The U.S. Travel Association commissioned a study that found that American workers are using only 77% of their paid time off. That adds up to 169 million forfeited days, which amounts to a whopping $52.4 billion in benefits that were simply given up.

Don’t do this. It’s your time. And it’s there to help you make the most of your work.

Here’s what you do: If you have some spare days in the bank, give yourself a three-day weekend. Or schedule a Wednesday off and break up the week. Then use that time to do something other than work.

Go ahead. Use your time however you want. (Or look into one of these hobbies that are proven to make you smarter.) And if you’re not at peace with the idea of turning off for an entire day, find solace in the fact that employees who use more vacation days end up with better performance reviews (and higher salaries).

In 1997, Dan Pink left his job as Chief Speechwriter for then-VP, Al Gore, and began writing books about business, work, and human behavior. He’s since authored several best sellers, including To Sell Is Human, in which he references the concept of the “jolt,” which, I think, is particularly advantageous.

Try a jolt of the unfamiliar. Clarity, we’ve learned, depends on the comparison. But many times we become so rutted in our own ways that we scarcely notice what we’re doing or why we’re doing it — which can impair our ability to bring clarity to others. Sometimes, as Tufts University psychologist Sam Sommers says, “it takes a jolt of the unfamiliar to remind you just how blind you are to your regular surroundings.”

Here’s what you do: Take Dan’s advice. Give yourself one of the following “jolts.”

Remember: Clarity is the mother of desire and action. It’s the ultimate fuel for a marketer. And a Full Jolt is one way to clear your mind and renew your perspective.

If leaving the country is a Full Jolt, then taking a sabbatical would be a concussion — a derailing, crippling concussion for your career, that is. At least that’s how some people see it. But depending on your professional circumstances, that’s not always the case.

If you’re employed by a progressive company that appreciates the benefits of a sabbatical, then you’ll know that a leave like this has the potential to do wonders for your productivity.

Here’s what you do: If you get the opportunity to take a sabbatical, do it. It might just change the way you think, act, and create for the better. And at the end of the day, that’s the whole point.

What are your best tips for “turning off” and regaining focus? Share them in the comments section below.

This article was written by Eddie Shleyner for Hubspot.