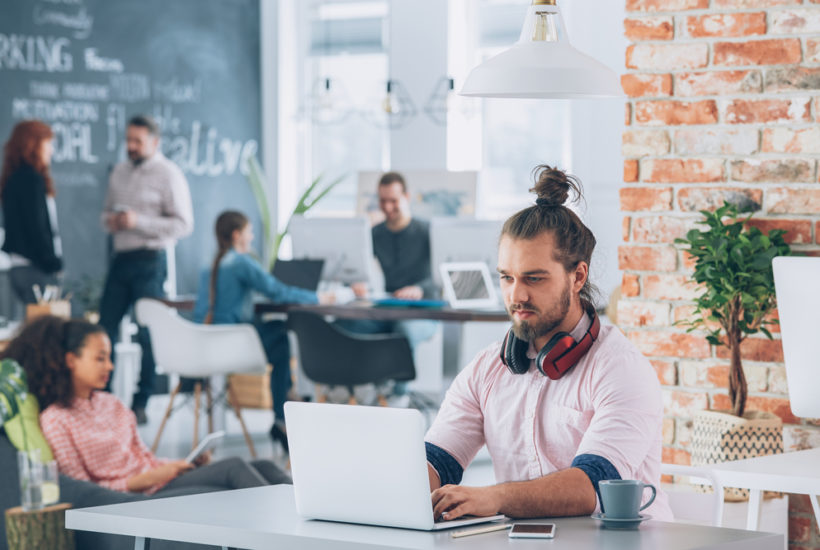 The concept of a co-working space is simple and yet, very functional: an interested party (a worker or a small-medium sized company) is offered a comfortable and fully equipped workspace for rent for a specified period. Сo-working has begun to develop as a separate office space segment only during the past decade. The growing popularity is attributed to several factors: the last world financial crisis, which made employee optimization a necessity, the global start-up boom and the emergence of the new economy of sharing.

As estimated by Knight Frank, over the past decade the number of flexible office spaces in the world has grown by 3,500 percent, while the number of people working there increased by 8,000 percent. According to the same data, at least 18,000 of such spaces exist around the world and they are able to accommodate at least 1.7m people.

How do co-working spaces work?

Сo-working offices are all fully-furnished open space premises with modern office equipment and furniture. The workspaces are usually leased to individuals for periods that can vary from one hour to several months or even years. The operator who sign agreements with the building owner usually acts as a managing entity. However, owners and operators can organize their cooperation in several ways:

Operator and owner sign a lease contract (usually for 10 to 20 years) and the management company agrees to regular rental payments while covering all maintenance and facility equipment costs.

The property owner and the operator sign an agreement under which the former invests a major portion of the initial capital. In exchange, the investor is given the first priority claim on the profits from the co-working space (exact amount is specified in the agreement). The co-working space operator becomes a managing partner and monitors the operation.

The owner of the building takes care of all the running costs. In turn, the operator takes charge of registering and promoting the space as well as finding new clients.

The property owner is liable for all the capital investment and manages the premises independently. As a franchise, the owner pays a certain fee and an annual royalty to the operating company. The operator guarantees the co-working space complies with its brand standards.

Co-working space operator decides to purchase the premises or the owner chooses to develop a flexible office area independently.

Сo-working spaces can be used in a variety of ways.

The first and simplest way is to set up a mixed flexible office. In this case, the representatives of different fields and companies may work side by side in the same room. Co-working spaces can also be specialized for professionals working in the same industry (such as IT) or young entrepreneurs to gather under one roof. The companies can develop quicker when they are exchanging ideas and information with other firms that have expertise in similar areas, thus forming a joint business environment.

Alternatively, a co-working space can be organized similarly to a lifestyle project. The emphasis, in this case, will be placed on the work-life balance (with the operator paying greater attention to the ergonomics of the facility, such as lounge areas). Users of such a co-working space can be entitled to numerous benefits including gyms, restaurants discounts and so on.

There are also some unorthodox types of co-working, those designed specifically for athletes, gamers, parents with young children and even those fond of silence. According to the Global Co-working Survey, a conventional flexible office typically occupies about 800m2, accommodating 70 workers. On average, people in the co-working offices are just over 36 years old, with almost 41 percent being freelancers and 36 percent in full employment. The biggest group of flexible workers is represented by the IT industry, immediately followed by PR and marketing.

Despite the fact that freelancers still make up the majority of co-working space residents, major employers have also started utilizing similar platforms in recent years. For example, the IT giants Microsoft, IBM, Amazon, and Google have already relocated their employees to flexible offices, while HSBC offered several hundred of its employees to work in a Hong Kong co-working space.

What makes co-working spaces so good?

The key advantage of a co-working space in comparison to a conventional office comes from its flexibility. This was the factor mentioned by 55 percent of the participants of the global survey conducted by Knight Frank. For instance, a recently launched start-up with up to five employees renting seats in a co-working space gets an opportunity to easily adjust the size of the occupied area depending on its needs. In case the business develops successfully, the tenant company can rapidly increase the number of workspaces, on demand, without a need to reserve office space in advance. Under a reverse scenario, the company has the right to leave the co-working space without paying a penalty that could be specified in a standard office rental agreement.

Market participants mention the originality of design and the convenient workspace configuration as well as the opportunity to form a unified community among the advantages of co-working spaces when comparing them to conventional offices. Another crucial positive factor is the price. As demonstrated by the Knight Frank report, in comparison to a conventional office, co-working space seats are on average 50 percent cheaper for a start-up to rent (compared to the costs of a 56m2 facility in technological and creative clusters of 21 metropolitan cities).

When taking out four co-working workspaces, the most efficient place would be the district of Shoreditch in London. A tenant can save around $28,933 per annum or 57 percent compared to renting a 56m2 office. The second most cost-efficient, is the Mid-Market of San Francisco with up to $37,680 in savings annually, with Boston’s co-working spaces cutting the costs by $36,150.

The main markets and forecasts

As of 2018, the Asia Pacific flexible workspace market was the fastest growing. According to the Instant Group report, the co-working space supply in its key cities increased by over 15 percent. According to expert estimates, the region has over 8,600 centers offering flexible offices.

In Hong Kong, more than 340 co-working spaces are available within the city only, dominating the Asia Pacific region. The market supply increased by 19 percent during 2018 (in contrast, the figure was twice lower for London). The supply also grew by 19 percent in Bangalore, Singapore, and Melbourne. Between 2014 and 2017, the Asia Pacific flexible office space market increased by 35 percent, outpacing the US (25.7 percent) and Europe (21.6 percent) during the same period.

The US is considered to be the “cradle” of co-working spaces and maintains its leadership position in North America. At the top of the list are the states of New York, California, and Texas, where the supply is increasing by 12 percent per annum. Elsewhere, the figure is significantly lower, just 4 percent. Flexible offices spaces are mainly concentrated in San Francisco, Los Angeles and New York City where they account for 2 percent of the total office space in Manhattan alone. According to CBRE, the flexible office market is the fastest-developing industry in the New York City borough.

SEE ALSO  The road towards green and sustainable mining

In Europe, London, Amsterdam, Paris, and Berlin are holding the top spots for the number of co-working spaces. According to Cushman & Wakefield, operators of such facilities have already gained up to four percent of the total office space market in central London.

Globally, the share of co-working spaces is still relatively low, well under 10 percent. This, however, does not make this segment less attractive for the investors. For instance, one of the key players, the US start-up WeWork has managed to attract at least $10b since 2017 and during the last investment round the company was valued at $47b. According to a forecast by Softbank, WeWork can reach an asset valuation of $100b in the nearest future, putting it in the same ballpark with such start-ups as Uber and Airbnb.

As of 2019, WeWork has been managing properties in over 100 cities in 27 countries. Notably, a significant share of WeWork’s clients (up to 30 percent) are enterprise clients with over 1,000 employees. Knote, a chain holding over 1 million square meters in assets is considered to be WeWork’s main competitor.

According to GCUC (Global Co-working Unconference Conference) forecasts, by 2022, the number of professionals using co-working spaces will increase to 5.1m, with Asia being the largest market in the industry. At the same time, JLL experts say that the flexible office space market will grow by an average of 25–30 percent per annum, expanding by about 7 million square meters over the next five years.

Growing demand from large corporations for greater flexibility and an increasing number of self-employed workers are regarded as the main drivers for market development. The latter is usually associated with generational change and the arrival of the so-called millennials. In addition, the development of co-working spaces will be favored by the growing number of start-ups amid the lack of office space. For instance, contrary to the conventional offices which are usually “bound” to business centers, flexible offices can be set up at a street retail site or almost any other type of property. For example, from 2010 to 2017, the rate at which retail spaces were occupied by co-working offices came to just 0.9 percent, while by 2023, according to the estimates, their presence in shopping centers and other retail properties will be growing at an annual rate of up to 25 percent.

The growth rate of the flexible office market and its impact cannot be ignored. Experts believe that the usage of сo-working spaces will increase over the next five years. Employees of today want spaces that meet their needs better; those of tomorrow will be expecting it. Providing flexibility and creating environments that inspire, stimulate and help in responding to changes is now non-negotiable. Meanwhile, those changes will also serve to attract the next generation of talent that companies need to succeed in a fast-paced, global marketplace.

(Featured image by Photographee.eu via Shutterstock)