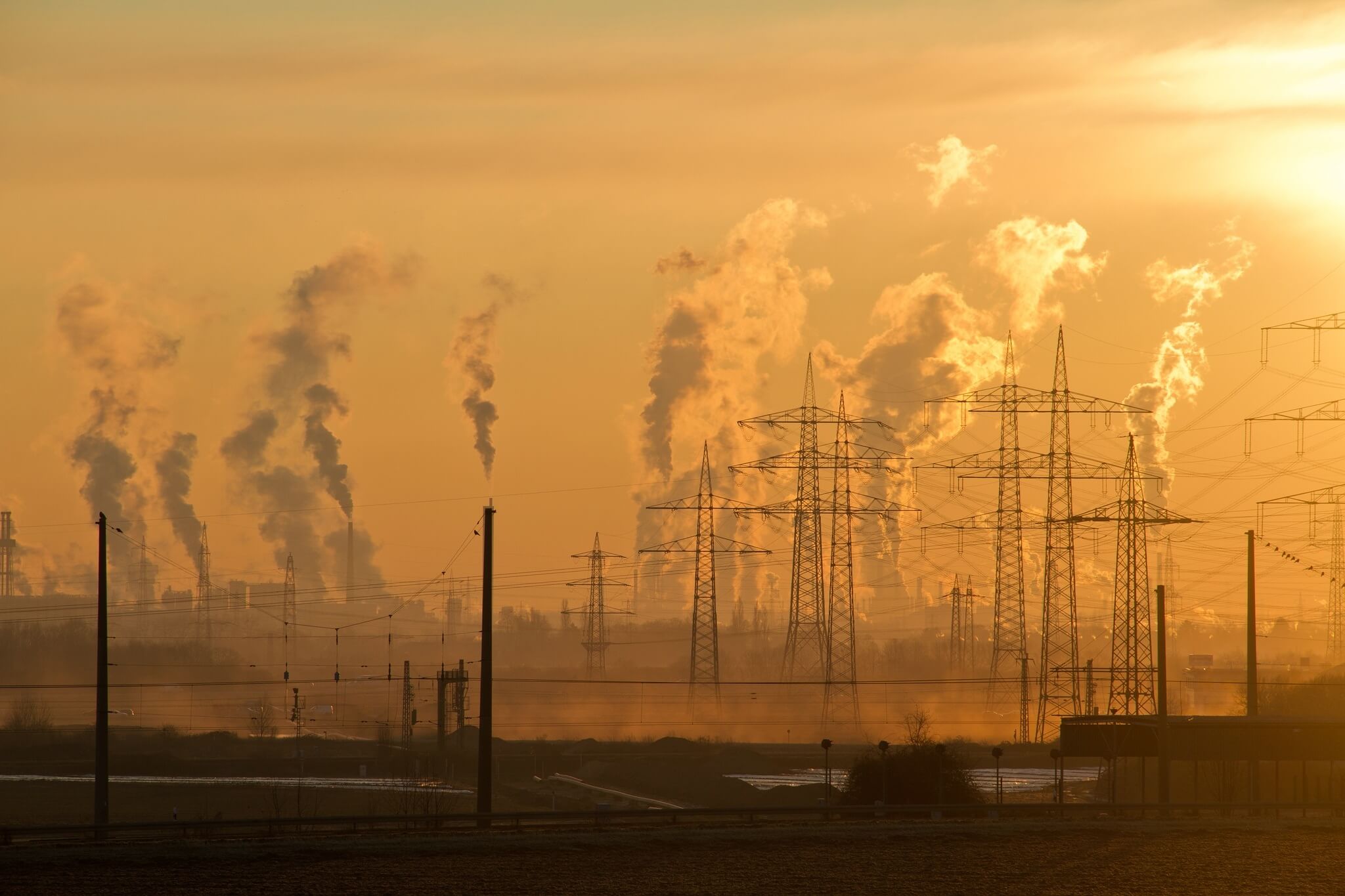 According to a two-year study published in The Lancet, pollution is the largest environmental cause of disease and premature death in the world today, causing an estimated 9 million premature deaths in 2015—16 percent of all deaths worldwide. This is three times more deaths than from AIDS, tuberculosis, and malaria combined and 15 times more than from all wars and other forms of violence, shown in the figure below. 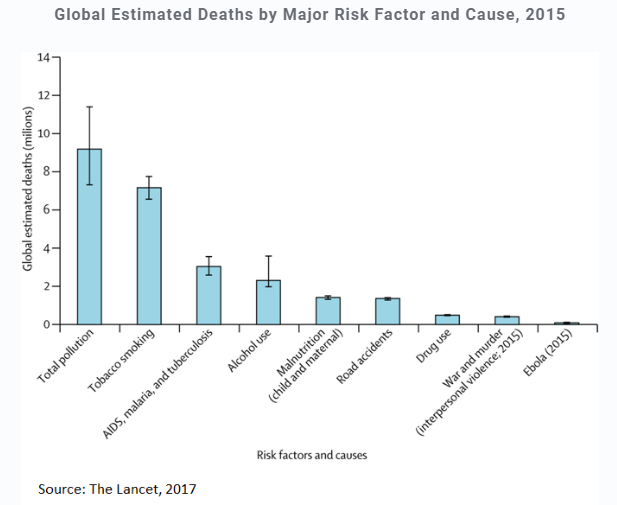 In the most severely affected countries, a pollution-related disease is responsible for more than one death in four. Nearly 92 percent of pollution-related deaths occur in low-income and middle-income countries, and in countries at every income level, a disease caused by pollution is most prevalent among minorities and the marginalized.

According to the study, in 2015, the greatest numbers of deaths due to pollution occurred in southeast Asia (3.2 million deaths) and the western Pacific (2.2 million death), shown in the figure below. The highest population-based estimates of premature death and disease due to pollution are seen in the low-income countries of sub-Saharan Africa. 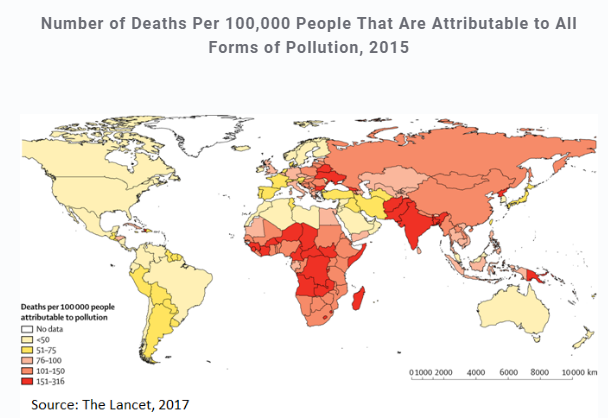 Children are at high risk of pollution-related disease, and even extremely low-dose exposures to pollutants during windows of vulnerability in utero and in early infancy can result in disease, disability, and death in childhood and across their lifespan. And of all types of pollution, air pollution has the biggest impact, shown in the figure below.

About 6.5 million people die every year because of air pollution, representing 70% of all pollution-related deaths. 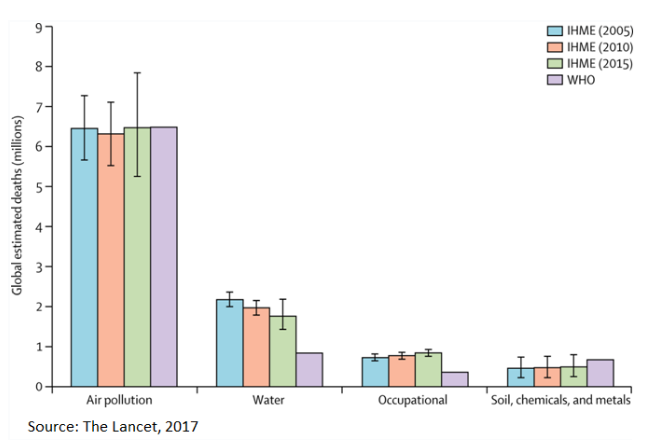 The study notes that while ambient air pollution in rapidly expanding mega-cities such as New Delhi and Beijing attracts the greatest public attention, the World Health Organization (WHO) documents that the problem of ambient air pollution is widespread in low-income and middle-income countries and finds that 98% of urban areas in developing countries with populations of more than 100,000 people fail to meet the WHO global air quality guideline for PM2·5 pollution of 10 μg/m³ of ambient air annually.

This is shown in the figure below.

Motor vehicles were noted as a major cause of ambient air pollution. So what does The Lancet study suggest as possible solutions? The following:

“Additional benefits are produced by controlling urban air pollution by upgrading public transportation, encouraging active transport (walking and cycling), reducing sulphur content of motor fuels, promoting use of low-emission and zero-emission vehicles (while concurrently cleaning the energy supply), and restricting car and trucks from city centres. These interventions not only improve air quality, but will also reduce childhood asthma, reduce incidence of cardiovascular disease, stroke, and diabetes in adults, and enhance the quality of urban life.”

In another section of the study, the authors similarly state:

“Pollution control, in turn, will benefit from efforts to slow the pace of climate change…by transitioning to a sustainable, circular economy that relies on non-polluting renewable energy, on efficient industrial processes that produce little waste, and on transport systems that restrict use of private vehicles in cities, enhance public transport, and promote active travel.”

Meantime, in London, 95% of residents or more than 7.9 million people are living in areas that exceed WHO guidelines for PM by more than 50%. In central London, the average annual levels are almost double the WHO limit of 10 µg/m3.

Moreover, the national government has failed to bring down the number of regions across the UK with illegal levels of air pollution despite being ordered to by the courts. Thirty-seven out of 43 zones across the UK are still in breach of pollution limits – the same number as in 2015 – despite the government being under a supreme court order to bring pollution down as soon as possible.

London Mayor Sadiq Khan, as previously noted, has taken a strong stand on air pollution, most recently implementing a T-charge of £10 affecting up to 10,000 of the oldest, most polluting vehicles every weekday, as it will apply to motorists who own vehicles that do not meet Euro 4 standards – typically those diesel and petrol vehicles registered before 2006. It will operate on top of, and during the same times as, the congestion charge already in place, meaning it will cost £21.50 a day to drive a pre-Euro 4 vehicle in the city center between 7 am and 6 pm Monday to Friday.

It’s a study like The Lancet’s and developments like what’s happening in London that will continue to fuel the car ban movement and the transition to EVs (though I would point out that studies suggest that they actually increase particulate matter). Without concerted messaging and intervention to showcase other pollution-reducing applications for vehicles, these two along with public transport will be the solutions.

Seeds are being planted in people’s minds (including some regulators) that the ICEV as we know it is just plain dangerous. And according to The Lancet study, it well is. Air pollution is a major existential threat to both the fuels (oil and biofuel) and car industry. Expect more cities/countries to simply ban or find ways to restrict ICEVs in favor of EVs, public transport and active transport (e.g. walking and biking).

Tammy Klein is the principal consultant for Future Fuel Strategies, and she provides market and policy intelligence, insight and analysis drawn from her global network in the fuels industry through her consulting services and member-based Future Fuels Outlook service. She is an expert on conventional, biofuels and alternative fuels market and policy issues. Tammy serves clients in the auto, oil and associated industries, as well as governments and NGOs and helps them understand current and future fuels trends and issues; or in the case of government and NGOs, the best policies to develop and implement. Tammy continues to serve as an advisor to many companies, governments and NGOs on transportation fuels issues. She has advised the Organization of Petroleum Exporting Countries (OPEC), International Petroleum Industry Environmental Conservation Association (IPIECA), Energy Management Authority (EMA) of Singapore and Natural Resources Defense Council (NRDC) and the International Energy Agency (IEA), among many others. She holds a J.D. from the Georgetown University Law Center and a B.S. in Journalism from the University of Florida.